It's Spring, and that means a wonderful rite of Spring, the team cycling camp, is upon us.

-WWVC went to Chris Gould's lair in Page Valley
-XO went to Ashville and is going to Lost River, and probably a sperm bank
-DC Velo is having camp in the back of a Don Beyer Kia (if it's rocking, Ryan McKinney is doing Wingate sprints)
-Bike Doctor went to Raw Talent Ranch in Lost River two weeks ago
-DVR went to Lost River last week
-Even Rapha Condor goes to Lost River
-Tim Rugg announced his intention of getting in some good base miles by joining the annual migration of the Arctic Tern, the world's longest migrating bird (unfortunately for the Tern, Rugg has a huge appetite and will devour most of the Tern before they reach their destination in Antarctica, and must complete the journey solo, with only the clanging of his brass testicles to comfort him)
-Tim Brown will eat tacos and enter into intensive douche training in Southern California. He may even discard his lower-booty-just-a-peak-revealing-cut jorts for below-the-knee board shorts.

Gary, being given a hug by his human, Jay Moglia 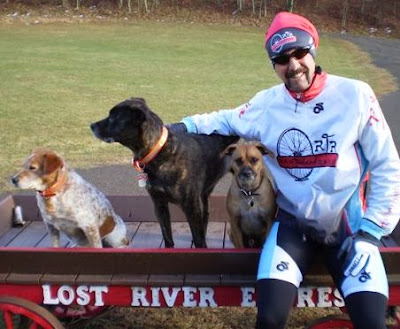 By far, the best of these options is Raw Talent Ranch in West Virginia. I say this from experience, having spent three days there with DVR last weekend. We rode in perfect weather on mostly empty roads, some dirt and some paved. All of the roads went up and down, which, if you're a real cyclist and not Nancy Szokan and her lazy husband, you'll love, even though you'll suffer for it.

There were around 24 of us, including 23 men and 1 woman. (Yes, she is incredibly brave, and, no, no one held back around her, and, yes, she challenged our core manhood on several of the climbs.) We rode with (Ranch proprieter and friend of Ranch Lord Gary) Jay Moglia, and John Cutler.

It was John who shot and edited this "rock video" of the team in action on the climbs and at our secret burning man fire jumping ritual.

(Music by Jay and John. That's Gary on the quena)

The fire shots are not photoshopped. I repeat, those are real shots of team member Tron leaping the roaring blaze, revealing an incredible FTP and a bit of drunken stupidity.

A number of members on the team have begun using Strava, and camp was an opportunity to see how we stacked up against other Strava-ddicts. Basically, we got smoked. Monika Sattler has clearly been receiving illegal wind doping assistance, because the girl laid down some uber-times on the Apple Orchard climb (among other climbs). We suggest a formal inquiry into her practices; specifically, the UCI should determine whether she has been practicing the illegal "throw" (i.e., when within throwing distance of the finish, detaching the Garmin from the bike and tossing the Garmin across the line, thereby recording a finishing time several seconds faster).

Paps does not Strava, preferring to collect data from pre-Columbian navigation instruments such as the sounding weight, the astrolobe, and the Saris Wired Powertap. Just be glad I'm not on Strava, because my times would have struck fear into the hearts of Strava-ddicts and probably led to the cancellation of several races, not to mention causing pregnancy in those unfortunate females who simply looked at my times, in the same way that the ancient Finns simply believed that looking at the god Äkräs could cause fertilization. (NB - Looking upon Gary, by the way, has done this to multiple beings of several species.)

Fertility is an appropriate topic for Spring, it being the season of birth and re-birth, of new ideas and new life, of rituals of renewal. Camp is such a ritual, turning a barn full of sweaty, flatulent dudes into a cohort of warriers, ready to face the new season and a new year.

I've never had a more enjoyable rite of Spring, including that time in Daytona Beach where I was roadie for Yo Yo Ma in his onstage collaborating with 2 Live Cru at the MTV Spring Break show in '93. I don't know if Gary and Jay are always as generous as they were with DVR (I like to think they bestowed special blessings on us), but if you receive a fraction of the beautitude bestowed on us, including the most ridiculous sea salt sprinkled chocolate chip cookies you've ever eaten, you'll walk away from the place a new person.
Posted by Unknown at 7:55 AM

Actually, we're at Wintergreen right now laying the smack down on each other so that you all feel out wrath on Sunday at Black Hill. Been here since Thursday. I can't wait to Strava the crap put of these ride when I get home!