The Subtle Power of those Tiny Pins 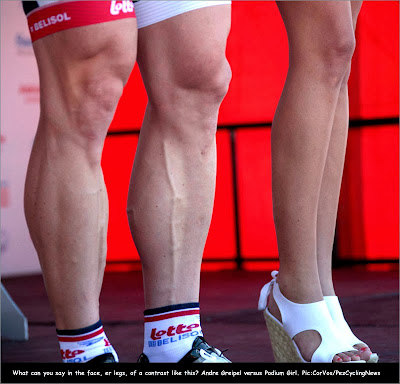 The Tour Down Under reached its moderately interesting conclusion this Sunday, and the word that came to me as I watched the last stage was power. Funny, because Americans are obsessed with power in sports. It's why the past decade was the greatest era in American sports. We were at our steroidally proficient peak power then. Not only that, we were simply huge: we not only want our sluggers to knock it out of the park; we want them to look like they've eaten the park.

Americans are obsessed with the appearance of power, which is why we love bodybuilding more than Olympic lifting, and why we love NASCAR more than Formula 1.

It's also why very few of us appreciate pro cycling. Pro cyclists--the Vanilla Gorilla excluded--look like victims of starvation, not powerhouses.

But if you wanted to power a light bulb or a machine for anything longer than 30 seconds, you'll find there's no human being better suited to putting out power than a cyclist.

Take, for instance, Andre Greipel. Here's some of his power data from last year's Tour Down Under. Notice that in stage one he jumped over 1,000 watts four times--in the final 2k. 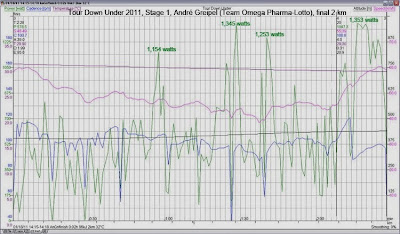 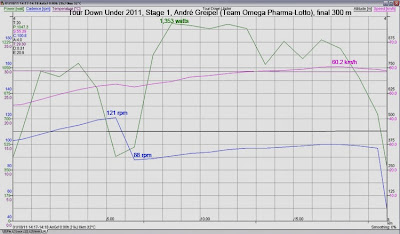 These are impressive values, but not anything astronomical. What's really impressive is that early Andre had averaged 465 watts for 3.4 kilometers, and had averaged over 230w for the entire 135km stage. 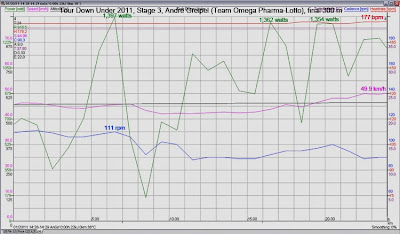 This is just one example of the extraordinary power in pro cyclists. Greipel is one of the few cyclists who actually appears powerful. But even he doesn't look as powerful as he actually is.

That subtlety, that's what makes cycling hard to watch. It can appear nonchalant, as if what happens in a pro race is what happens when kids hop on their Huffys and do laps in the driveway.

All that's needed to dispel the Sunday stroll myth of cycling is to actually try racing. When some scrawny Rugg-like kid jumps off the front and you can't even grab his wheel on level ground, you recognize that power is something concealed in those tiny little pins. At its best, it appears if by magic, and you begin to ask the question that is at the heart of cycling fandom: how does that little dude hoist a truck over his head for two hours straight?
Posted by Unknown at 8:11 AM